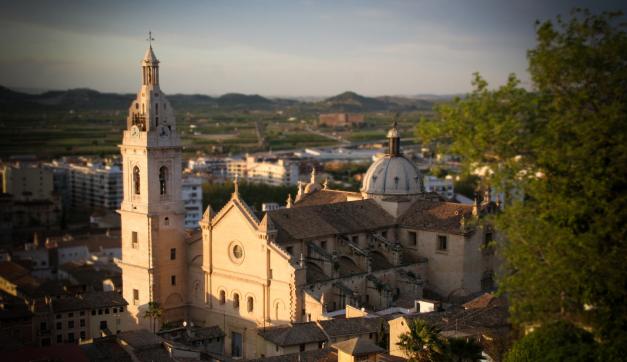 The Collegiate Basilica of Santa María is widely known as La Seu, although the city has never achieved its ambition of becoming a Bishopric. Together with the Castle, it is one of the city's most iconic buildings. It is listed as an Asset of Cultural Interest.

Work on the building began in the late 16th century on the site of the former mosque and lasted more than four centuries. It remains incomplete even today. The layout is in the shape of the Latin cross, with a heavily emphasised transept and an ambulatory, in the style and dimensions of the great Gothic cathedrals. The overall style is Herrerian.

The bell tower, which stands 60 metres high, dates from the 19th century and is topped with a shrine dedicated to the Virgin of the Snows, patroness of the city, which is reached by climbing 180 steps. In the main entrance to La Seu, which was not finished until the first third of the 20th century, are the bronze statues of Popes Calixtus III and Alexander VI.

The Museo Colegial houses the most valuable treasures of La Seu, an impressive collection of religious art with Gothic paintings, altarpieces attributed to Valencian artist Jacomart and outstanding examples of goldsmithing and silversmithing related to the liturgy and to the Borgia Popes.

The Custodia Mayor, housed in the museum, is a Flamboyant Gothic piece of silverware dating back to the 15th century. The Custodia is taken out in procession every year for the Corpus Christi celebrations. It's said that it was made with the first silver brought back from America, gifted by the Catholic King and Queen (the Reyes Católicos) to Pope Alexander VI and donated by him to the Collegiate Basilica. The museum also holds the Chalice of Calixtus III, a piece of Gothic goldsmithing gifted to the Collegiate Basilica by Pope Calixtus III. It comprises six medallions with scenes on the base, plus others on the knot and on the cup. The altarpiece of Santa Ana (Saint Anne) is also known as the altarpiece of Calixtus III, who commissioned it for the family chapel in the Collegiate Basilica. This altarpiece is a key work of Valencian Gothic, as it illustrates the transition from Gothic to Renaissance.