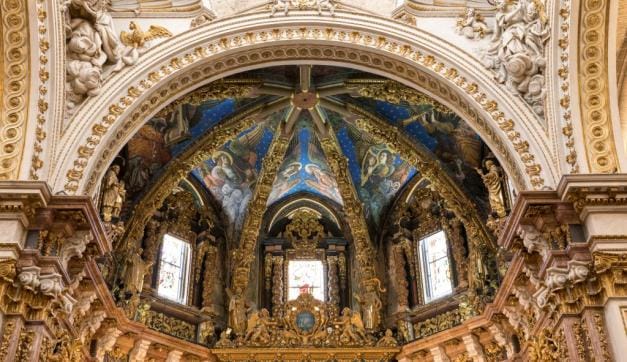 The Catedral de Santa María (Cathedral of Santa María) in València, popularly known as La Seu, is the headquarters of the Archbishop of València and it was the wish of King Jaime I that it should be dedicated to the Assumption of Mary. It was consecrated in 1238 by the first Bishop of València following the Reconquest, Fr. Andrés de Albalat.

València Cathedral was built on the site of an old Roman temple dedicated to Jupiter, which subsequently became the Visigoth cathedral and then the Arab mosque of Balansiya. Very little of these buildings has survived to the present day.

The cathedral's main structure was built between the 13th and 15th centuries, so it is primarily Gothic in style. However, because building work went on for centuries, the cathedral is a mix of artistic styles, ranging from Romanesque, French Gothic, Baroque and Neoclassic. This diversity is the cathedral's most distinctive feature and makes it a gem of universal architecture.

Inside, worshippers venerate the Santo Cáliz (the Holy Grail), dating from the 1st century and presented to the cathedral by King Alfonso el Magnánimo (the Magnanimous) in 1436.

The building currently houses the València Cathedral museum, which was set up in 1966 by the Archbishop of València, Marcelino Olaechea y Loizaga. The previous museum, the Museo de las Antigüedades (Museum of Antiquities), otherwise known as the Museo Diocesano Valentino (Valencian Diocesan Museum), was founded by Archbishop Andrés Mayoral in 1761 and housed in rooms at the Archbishop's Palace. This museum disappeared during the French invasion of 1808.

In 2015, major restoration work enabled the museum to be set up once again with a new exhibition concept, opening up new floors and rooms. Plus, during the restoration work and excavations carried out beneath the building, a number of archaeological finds were unearthed dating from Roman, Visigoth, Muslim and Christian eras, as well as the foundations of the cathedral's 13th century bell tower.

The museum entrance is through a door in the cathedral's Capilla del Santo Cáliz (Chapel of the Holy Grail). This door leads into the first room of the museum, where visitors can see a graceful 15th century spiral column. This room was originally known as the old library or the Library of the Borgias.