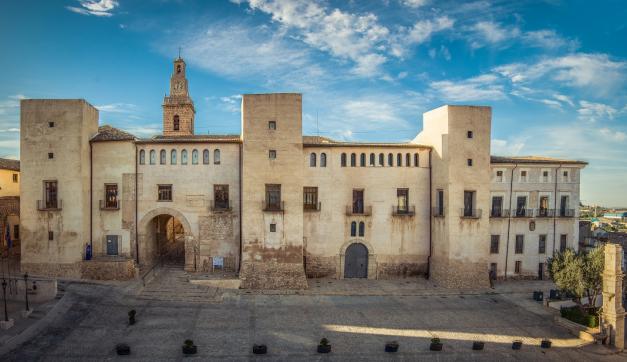 Palace of the Marquis of Milà i Aragó

Although there must have been a more or less fortified manor house in this same location before the palace was built, the building you see today dates back to 1471-1477, when the Milà i Aragó family obtained the Lordship of Albaida. The original palace was built on the site of the Muslim town wall, reinforcing the area of the Puerta de la Vila (Town Gate) with its great Poniente tower, the only one of its kind in the town in those days.

The late 15th century building had the appearance of a noble residence and the main entrance to the site was next to the town wall. In the late 16th and early 17th century the old church was demolished to free up more space. The planned new church needed a lot of land and part of the palace also had to be demolished. The first refurbishment work took place while the Milà family was still living sporadically in Albaida and the palace was given a square layout with an inner courtyard. Two new towers were built, known as Mig and Llevant, although by that time the building was already more residential than defensive. Building and renovation work went on for some years. The last significant work was carried out in the 19th century, on the present main entrance from Plaza Mayor.

One particular feature on the outer walls of the palace are the heraldic shields from different periods. Inside, the rooms are decorated with colourful Baroque paintings by Albaida-born painter Bertomeu Albert and dating from the late 17th century. Particularly important rooms are the Sala del Trono, Sala de la Música, Sala del Cristo, La Blanca and the Marquis's bedroom and sitting room. In the renovated part of the palace, accessed from the inside, you can find Museo Internacional de Títeres (International Puppet Museum) in Albaida. The municipal tourist office also occupies rooms in the palace.