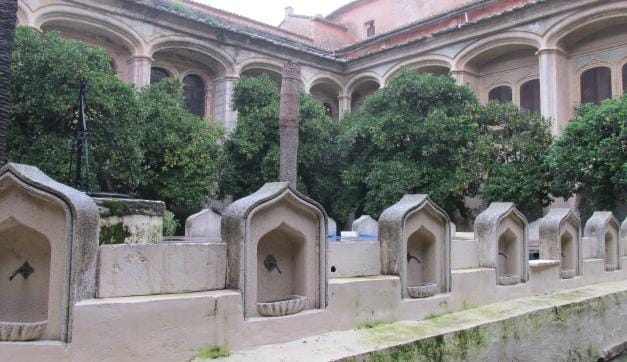 The Monastery of Sant Jeroni de Cotalba in the municipal area of Alfauir (València) is set on the hillock of Cotalba in beautiful countryside only about eight kilometres from Gandía. It's privately owned and has been open to the public since 2005 through an agreement set up with the Department of Culture at the Generalitat Valenciana, the València regional government.

It's one of the most outstanding and best-preserved monastic sites across the whole of the Region of València, a fact that's emphasised by the diversity of styles found in the buildings, ranging from primitive 14th century Medieval Gothic structures through to the main developments that took place from the 16th to the 18th centuries.

This lovely monument original belonged to the Jerónimos (Order of Saint Jerome) and has been listed as an Asset of Cultural Interest since 1994. It was built in 1388 and contains important Mudéjar, Gothic, Baroque and Neo-Classic features.

Visitors can admire the entrance courtyard, with the Gothic tower, orange grove courtyard, Mudéjar cloister, the old church and its Baroque chapel, the old chapter hall with an image of the Virgen de la Salud, the oil press with the Father Borrás fresco (the Holy Supper after the Juan de Juanes school), silo, wine press, stables, the old monks' kitchen plus the impressive romantic gardens and the aqueduct that surrounds it.

During the 16th century, the Monastery was under the protection of the Borgia and it was the Duchess of Gandía, María Enríquez de Luna, widow of Duke Juan de Borgia y Cattanei and daughter-in-law of Pope Alexander VI, who carried out work on extending the monastery, including the late Gothic upper cloister and the Medieval cistern in the Patio de los Naranjos (orange grove courtyard). Later, Saint Francisco de Borgia was a frequent visitor to the monastery and his wife, Leonor de Castro, spent her final days there, recovering from her illnesses.