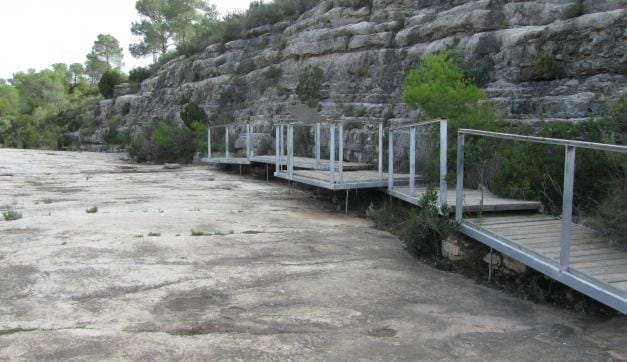 The ichnological site of the Rambla del Tambuc is located about 90 km southwest of Valencia, in the so-called Macizo Caroig mountain range, about 17 km south of the urban centre of Millares, in whose municipality it is located.

The site has two main outcrops, located on the bedrock of the ravine of Tambuc, on both sides of the CV-580 road that crosses the aforementioned ravine. The access to the site is good, since it is accessed directly through two roads that start from the aforementioned road. It occupies an approximate area of 6,000 m2.

It is the most significant ichnological site in the Region of Valencia, both due to the number of sites and traces and due to the good state of preservation of some of them.

The ichnites, about 85 million years old, are located on a well-stratified sequence of the geological unit called Limestone Formation and Calcareous Gaps of the Sierra de Utiel, formed during the Late Cretaceous Period. These were made by dinosaurs that moved through extensive coastal plains, during the phases of low tide.

It is the most recent dating site of dinosaur ichnites in the Region of Valencia, and provides valuable information on the composition of the dinosaur faunas at the end of the Cretaceous Period.

It consists of more than 400 tridactyl icnites, 42 of them arranged in 13 traces. There is some variability in size and shape of the ichnites, so it cannot be ruled out that they were prints of dinosaurs of different species. The prints, due to their morphology and size, can be attributed to biped, theropod or euornithopod dinosaurs of a medium size.