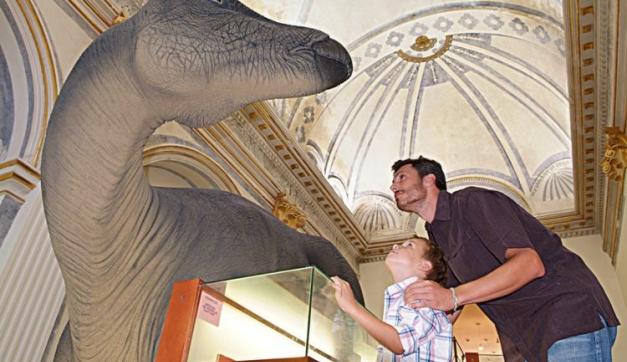 Discover the fascinating universe of dinosaurs and their history in Morella

Morella is a land of strata that formed between the Late Jurassic and Early Cretaceous Periods, between 146 and 98 million years ago. Water covered these valleys that have left abundant and valuable remains of marine fauna and calcareous algae.

Morella is one of the pioneers in the discovery of dinosaur remains in the Iberian Peninsula, possessing much paleontological wealth. In the region, major sites have been found with remains mainly of iguanodontid euornithopods, although ankylosaurs, titanosauriforms, spinosaurids, euornithopods, coelurosaurs, crocodiles, turtles, plesiosaurs and sharks have also been found among other vertebrates.

In the Cretaceous Period, at the site of Morella, evolution resulted in the formation of clays, a feature that has allowed numerous dinosaurs remains to exist. For decades palaeontologists have been exploring and discovering these treasures, dinosaur bones, notably the most found and studied species, the Iguanodon. In this museum we can enjoy a real scale reproduction of this imposing animal that lived in these lands.

The Temps de Dinosaures Museum is a journey to the centre of the earth, where young and old can traverse the fascinating world of geology and palaeontology through the collection of fossils dating from the Cretaceous Period. Furthermore, in it we can discover an extensive paleontological exhibition.

The permanent exhibition is in the Chapel of the Communion of the Church of San Miguel. All the information that is offered to visitors is done so through information panels, models and fossil remains that bear witness to the paleontological richness of the region and constitute the background of this centre. Here you can see carnivorous theropods and huge herbivores, euornithopods and armoured dinosaurs, as well as molluscs, brachiopods, calcareous algae, corals and small vertebrates, especially fish.