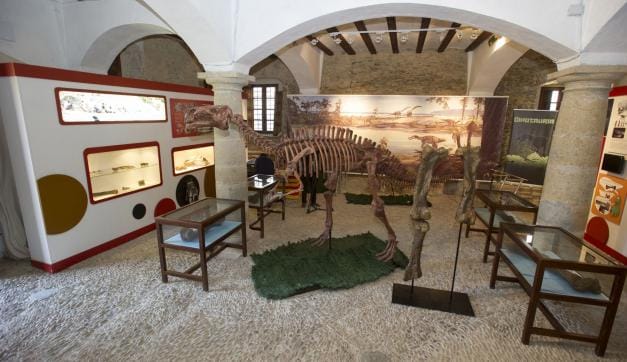 The Cinctorres Museum Collection is in the Palace of Sant Joans, which originates in the 15th century, although its current structure is 17th century, of a gothic Aragonese style. Its façade is made of stone with a double wooden aileron. It has a square tower with a hip roof, at the vertex of which there is a Maltese Cross.

The lower floor houses the permanent Cinctorres museum collection, in which the dinosaur fossils of the Ana paleontological site are notable. The exhibition space is divided into three rooms: the first one is dedicated to the paleontological excavation process. In it, it explains how work is carried out in a field campaign and how dinosaur fossils are recovered, based on the example of the Ana site in the town. The second room simulates a paleontological preparation laboratory and teaches the techniques and processes used in the preparation of the paleontological material that comes from the field to the laboratory. In this room there is also a collection of invertebrate fossils. The third room is dedicated to the palaeobiology of dinosaurs. Through panels, replicas and originals it shows what they were like and how the dinosaurs lived.

The Ana Site was discovered in 1998 and the first excavation was carried out in May 2002. Given the success of the first work, it was decided to expand the area to be excavated, and in September a second campaign was carried out. After the successes of 2002, a new work was prepared in 2004. Subsequently in 2005, 2008, 2009, 2011 and 2015, the site was studied and a total of 937 fossils were recovered, most of them from dinosaurs about 126 million years old. Its history, its findings and its peculiarities make Ana a unique site, which is bearing a great amount of scientific, cultural and heritage fruits. The site is prepared for visits, with panels and replicas of dinosaur bones.