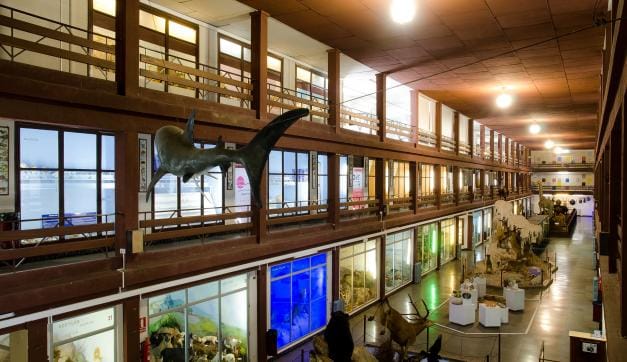 The Museum is located in a building divided into three floors and with a large common space in the centre.

On the ground floor we can find thirty-two display cabinets with the world’s fauna except for the smaller birds that are found on the first floor. On this ground floor, there is also the library and temporary exhibitions room, the projection room and a classroom, with capacity for sixty people, in which lectures, audiovisual projections, auditions and specific classes are held.

On the first floor, along with the smaller birds, we can find other sections of Osteology, Anatomy, Malacology (molluscs), Oology (eggs), Phytopathology, Entomology and Botany.

This is all we can discover during our visit to "El Carmen" Natural Sciences Collection: over 2,000 species of mammals, birds, fish, reptiles, crustaceans and batrachians. Also, an invertebrates section with about 5,500 species, more than 1,500 plants in the herbaria, 3,500 minerals, more than 500 fossils, and an equal number in the Malacology section. There are fifty anatomical pieces and the same in the Osteology section.